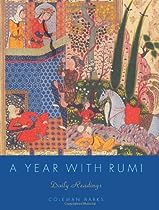 Jalal ad-Din Muhammad Rumi- known simply as Rumi – was a 13th-century Persian poet, jurist, theologian, and Sufi mystic. Iranians, Turks, Afghans, Tajiks, and other Central Asian Muslims as well as the Muslims of South Asia have greatly appreciated his spiritual legacy in the past seven centuries. Rumi’s importance is considered to transcend national and ethnic borders. His poems have been widely translated into many of the world’s languages and transposed into various formats. In 2007, he was described as the “most popular poet in America.”

Rumi’s works are written in Persian and his Mathnawi remains one of the purest literary glories of Persia, and one of the crowning glories of the Persian language. His original works are widely read today in their original language across the Persian-speaking world. Translations of his works are very popular in other countries. Wikipedia

Rumi’s Little Book of Life is a beautiful collection of 196 poems by Rumi, previously unavailable in English. Translated by native Persian speakers, Maryam Mafi and Azima Melita Kolin, this collection will appeal to Rumi lovers everywhere.

This collection of mystical poetry focuses on one of life’s core issues: coming to grips with the inner life. During the course of life, each of us is engaged on an inner journey. Rumi’s Little Book of Life is a guidebook for that journey. The poetry is a companion for those who consciously enter the inner world to explore the gardens within – out of the everyday “world of dust” – through an ascending hierarchy that restores one’s soul to the heart; the heart of the spirit; and in finding spirit, transcending all.

Yesterday is gone and its tale told. Today new seeds are growing.

You were born with wings. Why prefer to crawl through life?

Your essence is gold hidden in dust. To reveal its splendour you need to burn in the fire of love.

Your task is not to seek for love, but merely to seek and find all the barriers within yourself that you have built against it.